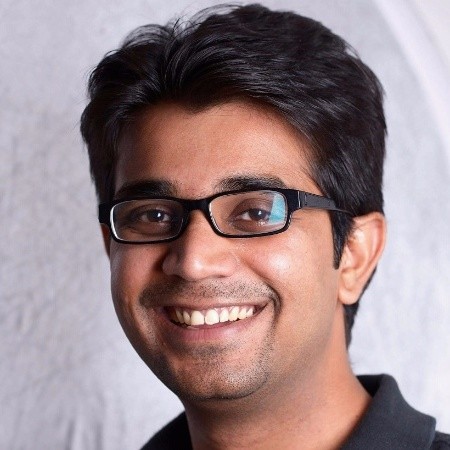 Established in 2014 by Mr Ramakrishna Shenoy, ARKADE has a team of around 6 members with 2 Associate Architects and Junior Architects. The firm, aspires to create designs which heighten user awareness and by being environmentally friendly in its design approach. Over the last 22 years he has worked, consulted and collaborated with multiple organisations including MOSAIC, Goa and RDA Harris International, Malaysia. He has participated and won multiple architectural competitions.

Surabhi Saran, is an energy analyst that joined the firm in early 2018. She has a background in Architecture, having completed her B.Arch for MSRIT Bangalore in 2014 and MSc. in Environmental Architecture fromMackintosh School of Architecture, Glasgow.

The team acknowledges the contribution from Mansi Parikh, Shruti Shiva, Suresh Tanaka and Asis Nath from Terra Viridis for providing their valuable support and sharing their wealth of knowledge. 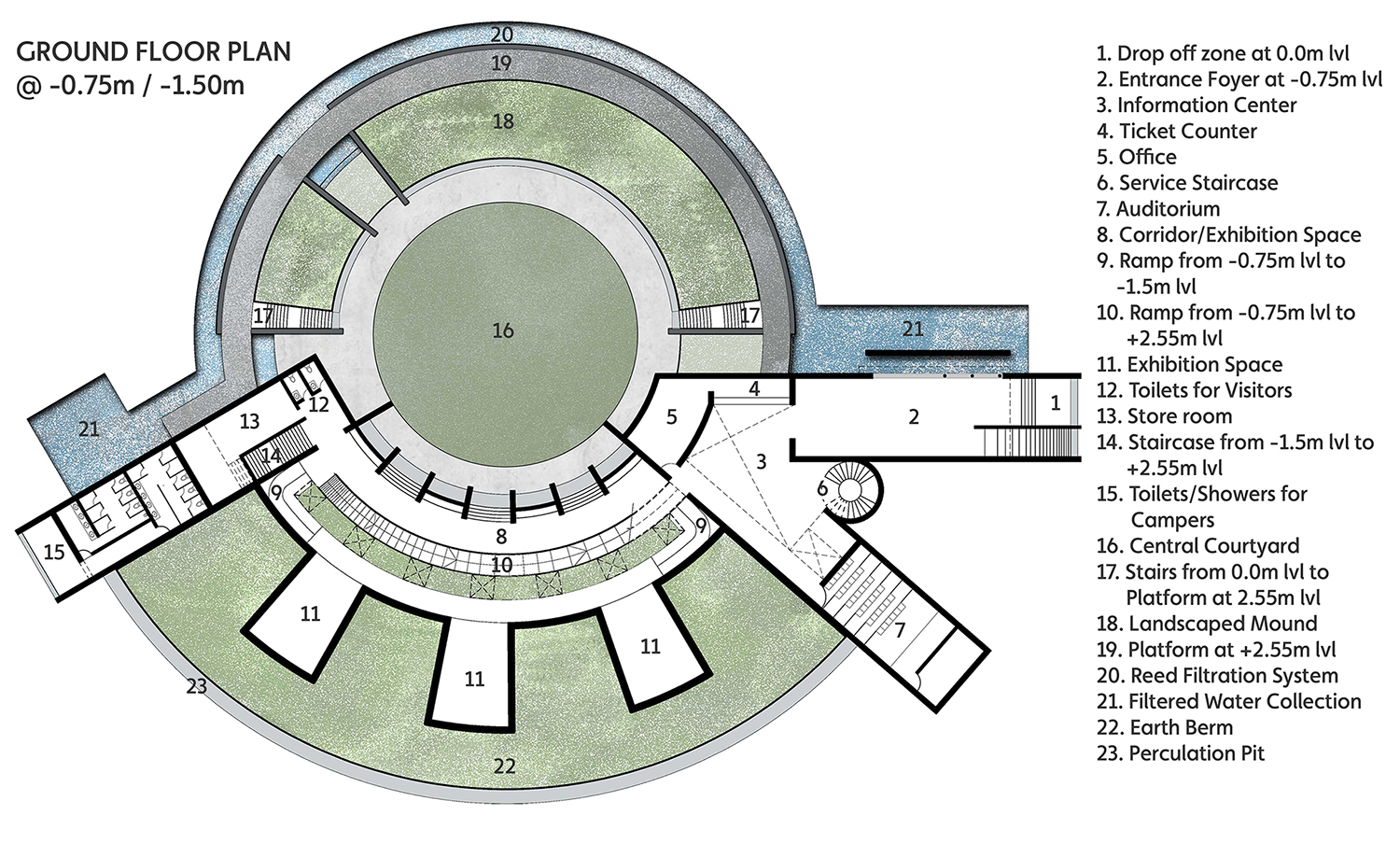 The Design proposal begins to unravel its sequentially layered spaces through the play of light, texture and material. The critical aspects that drove the idea for the design, was the integrated understanding of various factors such as climatic conditions, topography, soil, vegetation and views and vistas.

The building is developed as a filter which effortlessly selects desirable environmental parameter to bring to its occupants. The optimised shading, provision of renewable energy sources, enhanced day lighting, & careful analysis of the weather file created a design that was tailored to the Hot and Dry Semi-arid climate of Sawai - Madhopur. 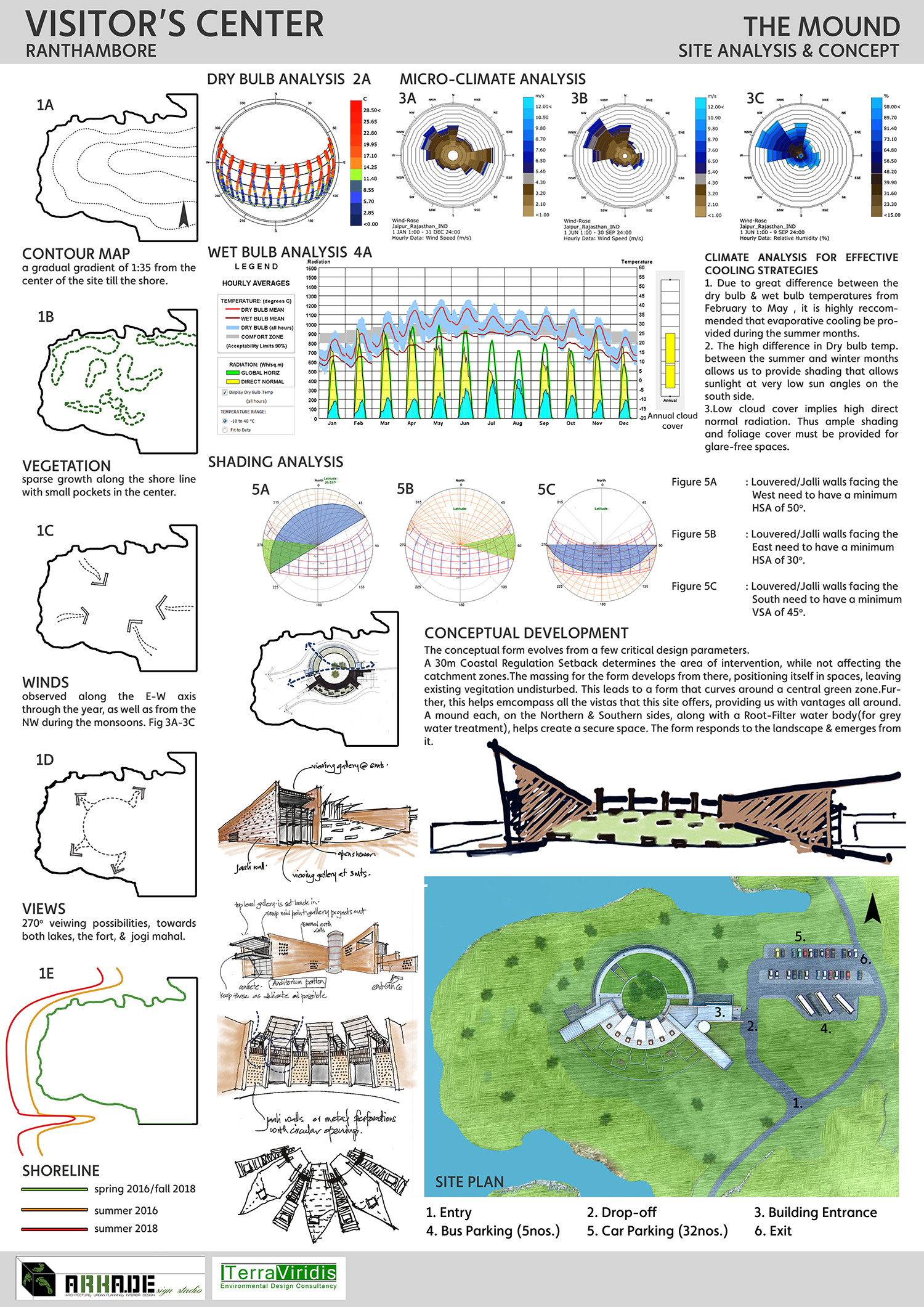 The user experiences the building through a grand entry which takes them to the information desk and the ticketing zone, from where they are guided to the audio visual room for an orientation. The user then has a choice of either going through the various exhibits which have been sunken below the ground level to create a series of symbolic caves .These exhibition spaces are separated from the connecting corridors and the central courtyard by a cluster of vegetation lit from above through the solar chimneys which double up as skylights.

The high fluctuation in diurnal as well as seasonal dry bulb temperatures were used to our advantage wherever possible. A night-time cooling strategy, if implemented correctly,would be very beneficial. The large difference in the wet bulb and dry bulb temperature indicates that evaporative cooling technique would be most beneficial in order to bring thermal comfort. The presence of a water body had a significant positive impact on the micro-climate. The effects of the favorable micro-climate were amplified by creating wind channels in the mound. Water reservoirs were also placed at strategic locations to augment the effects of evaporative cooling.

As the user ascends to the upper level the mid landing offers a viewing gallery which overlooks the lake and the fort. The upper level which houses the cafeteria, the kitchen and the kitchen garden, is the culmination of the visual experience as it provides a series of vantage points to appreciate the surrounding landscape. The mound which is a series of cascading levels, emulating the stepped wells commonly found in Rajasthan can also be used for informal seating and also doubles up as a secure ground for camping.

On the upper level, solar heat gains are minimized through the use of heavily insulated roof and optimum shading. Intense solar radiation (in clear skies)was not only optimized but used in three fundamental ways -

1. As a renewable source of electricity - Achieved by optimally placed solar panels

2. As an inducer of stack ventilation - Achieved through heated aerofoil louvers in solar chimneys

3. As a source of warmth and daylight at low sun angles- Achieved through optimized, perforated jallie walls and shading devices.

Thermal comfort was the main metric to achieve, that would significantly lower the energy consumption for cooling. Since the building has a high floating population other energy consuming systems such as lighting, equipment would not have as high an energy demand as cooling would. Assuming that active cooling (suggested evaporative coolers) is only used during the 30-40% discomfort hours, the building would only require 15,550 KWh/yr of energy which amounts to 14.57% of total electricity generated from the on-site renewable sources thus achieving Net-Zero energy. 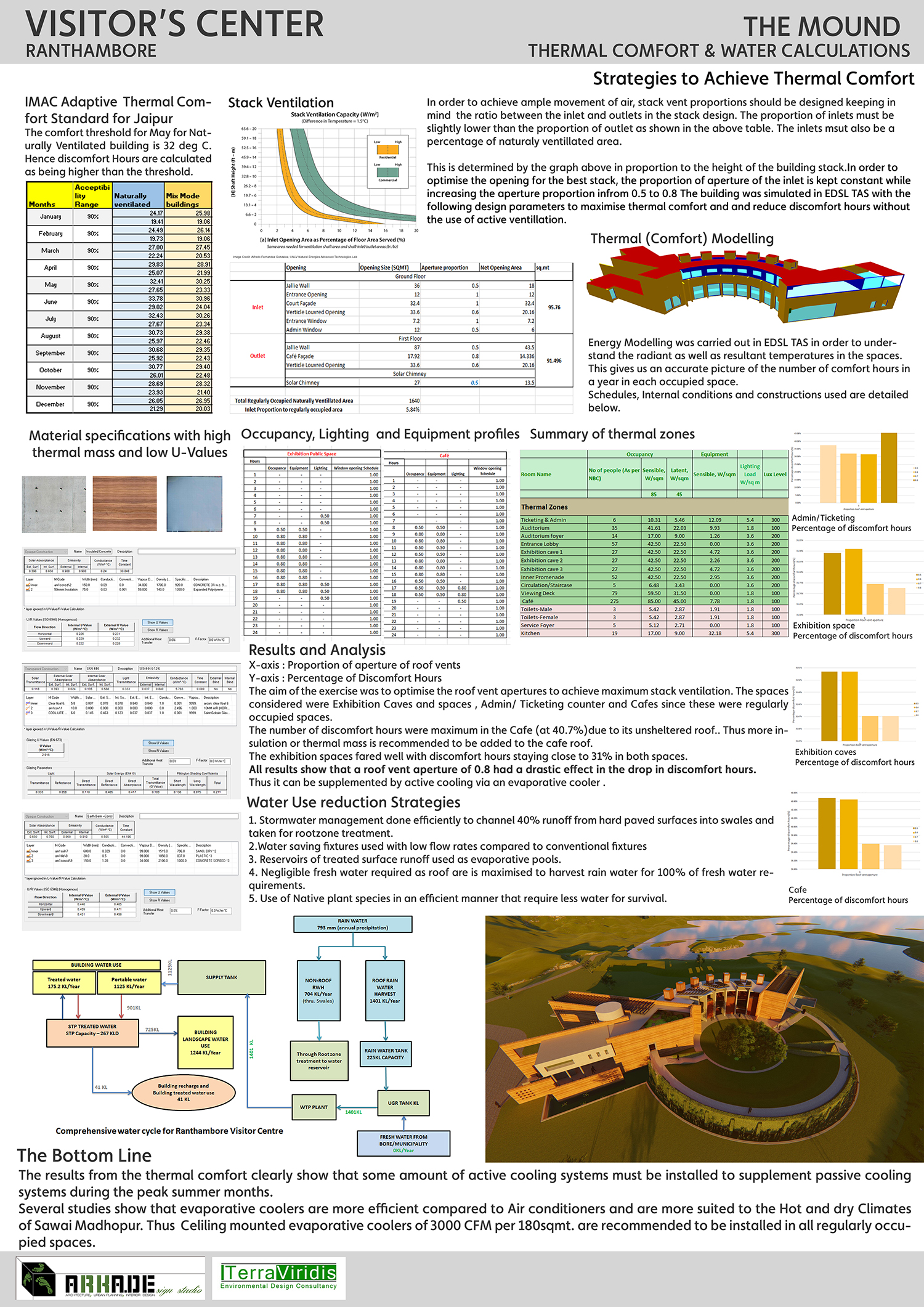 The central courtyard which is enclosed by an inwardly sloped mound, can be used for informal activities such as cultural performances, children’s play area and even for camping. The landscape uses native vegetationin order to conserve water and the hard paved surfaces are carefully designed to collect water, filter and feed it to water reservoirs.This achieves a Net-zero water design.

The simple stroke of the geometric circle inscribes its self within the landscape in such a way that it fortifies itself as the centrally prominent built form.It also tends to dual itself as a subscriber to the surroundings, and this is achieved by the earth berms that envelope the information center, thus inspiring the idea of calling it THE MOUND. These attributes are dictated by the contemporary interpretation of the chattries, courtyards, stepped wells and pavilions that are significant components of the architectural vocabulary of Rajasthan. 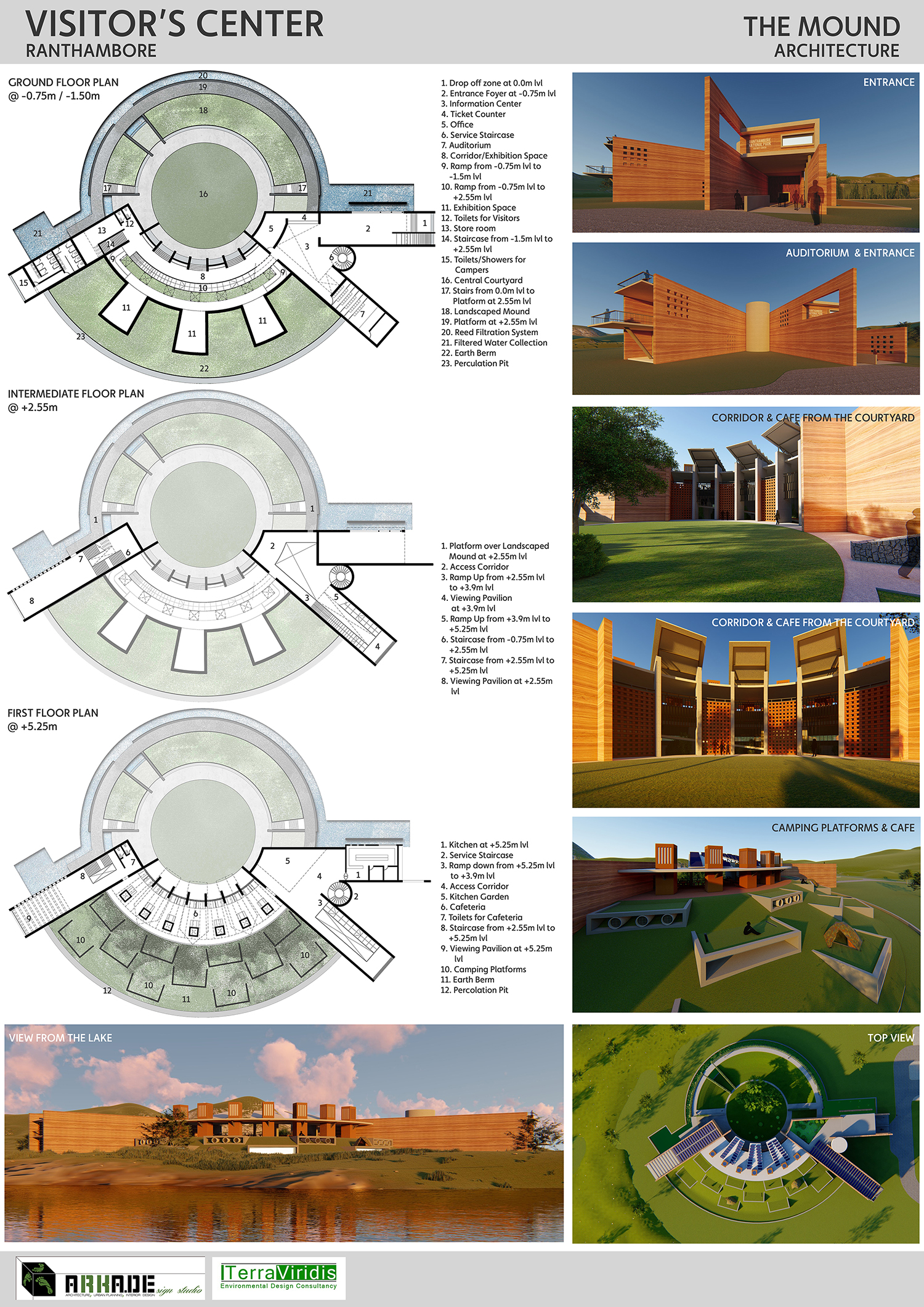 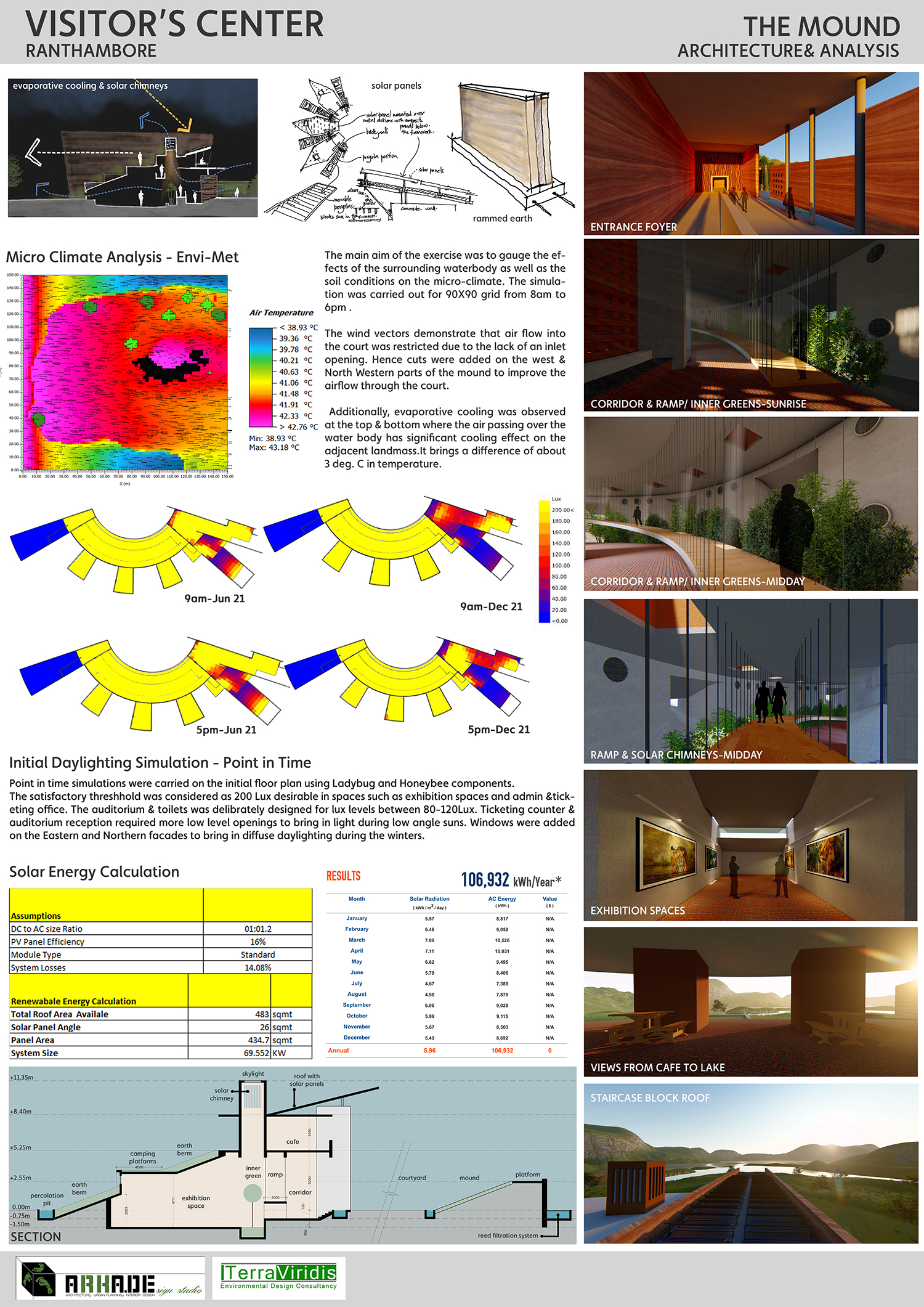 Here you will find recent news, informative articles and answers to FAQs.